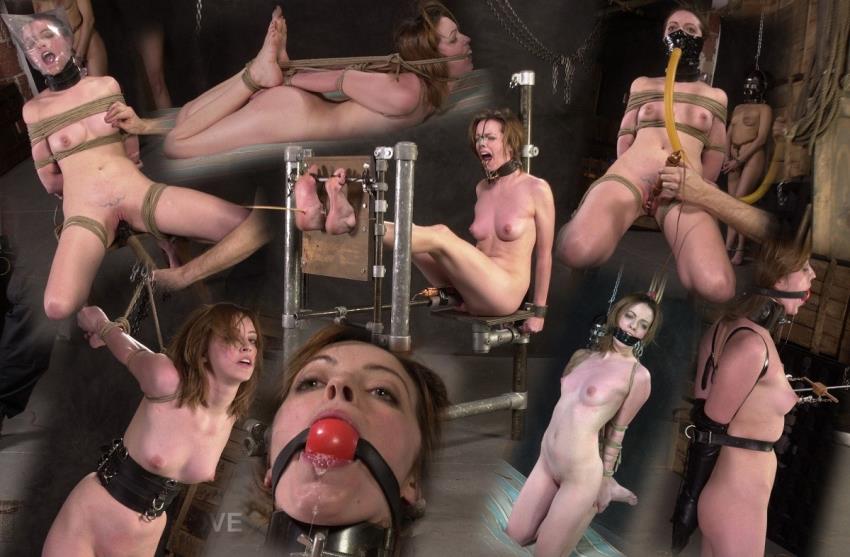 
Description: Dressed in a conservative knee length skirt, matching top, and sensible high heels I awaited my fate, gagged and cuffed, while talking myself into the appropriate mood needed. Only at times was I aware of the movement around me instead I was attempting to control the drool that was forming around the tightly cinched rope wetting the mattress and smearing my freshly made up face. I was preparing mentally for the physical strength that was going to be demanded of me. The count down. I was overwhelmed by uncertainty and nervousness. When the clock struck 10 I melted at PDs initial touch. The first sensation of his hand was soft and gentle then in the matter of seconds I was gasping and choking! Struggling with the cut off air I managed to look directly into the lens of the camera reminding myself that people the world over were about to witness intense power exchange and I was the object of torture! Cold scissor blades cutting off my carefully chosen outfit left me feeling helpless and craving to be violated. The one leg semi suspension opened my pussy for the world to see. I could not shy away by attempting to shut my legs since the bondage was so strict. A weakness of mine is dealing with any sort of pain inflicted on or even near my vulva but I endured the whipping, surprising myself, but not without whimpering, of course. I have a fantasy of being objectified and when PD said "Lets get some detail on this cunt" I knew I was right where I yearned to be. The bishop contraption was terrifying. impaled by an electrical monster it was all up to my balance or else a horrible shock would jolt through my body. It was much too intense for me... I became so parched from the loud screams I uncontrollably released I ended up begging PD for water which he just spit it in my face. How humiliating- . I could not take the suspense when he decided to control the shocks. He was taking me over the edge. The foot torture device I was locked into was amazing. PD tied each toe individually... which is yet another one of my kinks. I have never experienced flames on my soles before and that scared me quite a bit. If I have never tried something I am hesitant to do it- only because I do not know what to expect. The caning on my underarms was another sensation I have never felt. It was very painful but I still proudly wear the marks. I had absolutely no control. I could not move my feet at all. I was completely vulnerable. I was on an emotional rollercoaster. One moment screaming as loud as my vocal cords allowed. The next weeping softly to myself. Then smiling from my heart. I left that night with actual cane marks on my soles which I never thought was possible considering how tough the skin is. Tied to the chair. Gasping for my right to breathe. Feeling desperation as he controlled the tube of sweet oxygen. Having a line crossed by the gauze being shoved up my nostrils. Every one of these elements helped in my reaching orgasm... 3 in a row no less. I left that night flying high as a kite. Unable to sleep, tossing and turning while dreaming of bastinado, Mr. Pogo, tied toes, and breath control. Wet dream after wet dream. PD gave me an incredible gift. One that I will never forget.